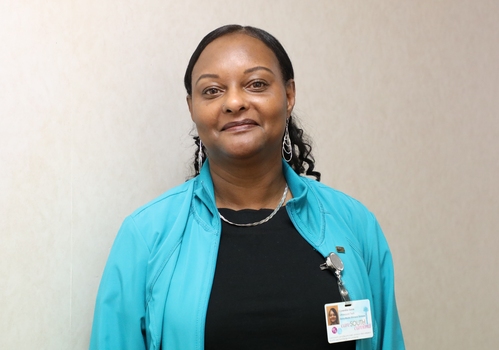 Goins named 2022 Employee of the Year

CareSouth Carolina Ultrasound Technologist Cysandra Goins was named the 2022 Employee of the Year during the organization’s Staff Meeting on December 14. Goins, who has been with CareSouth Carolina since 2016, said she was “truly honored and humbled” to receive this award.

“My career as an ultrasound technologist has been very fulfilling,” Goins said. “I have been very fortunate to find an organization such as CareSouth Carolina, that aligns with my own personal values and commitments which are to openly serve with excellence, joy, respect, integrity and trust. I would also like to give an enormous salute to all of the respected nominees for this year.”

CareSouth Carolina Chief Personnel Officer Denise Ellis said Goins was nominated by a provider at her office after taking life-saving measures for a patient. Goins had received an order to perform an abdominal/pelvic scan because the patient was complaining of severe pain, Ellis explained. While doing a routine ultrasound she scanned a vessel that alarmed her. Ellis went on to say that Goins was concerned it could be an aneurysm surrounded by thrombosis – or clot - and transferred the patient to the hospital via ambulance. The patient was referred to a vascular surgeon for repair.

“Cysandra saved this woman’s life,” Ellis said. “We were lucky that a bad outcome didn’t occur prior to her surgery. Cysandra puts patients first, always.”

CareSouth Carolina CEO Ann Lewis congratulated Goins on the award saying, “I am so proud that Cysandra has received this recognition. She has made such a difference to so many patients with an unselfish, compassionate and caring manner. We are so fortunate to have her at CareSouth Carolina.”