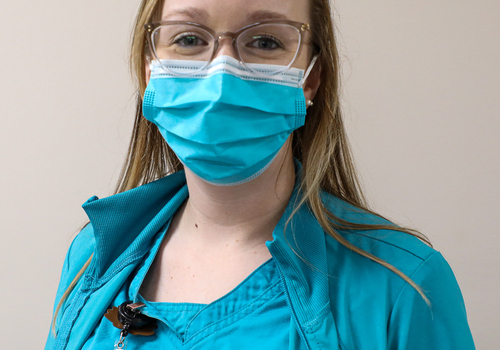 SOCIETY HILL, S.C. – It may have been a surprise to Cameron Jackson when she was named CareSouth Carolina’s 2020 ‘Employee of the Year,’ but everyone around her knew exactly where the award was going.

It was just a normal day back in May of 2020 at the CareSouth Carolina Rosa Lee Gerald Center when a patient came to the front desk to report a man slumped over the steering wheel in his car.

“The Code Help team found a man with no pulse, completely unresponsive, unable to be revived,” Jackson’s nomination read.

“Our very own Cameron Jackson said, ‘We need Narcan!’ and ran to the Society Hill pharmacy, returned with Narcan, which was administered by Ms. Brown and Dr. Moyd [two provides at the CSC office],” the nomination said. “Within minutes, the patient was brought back from the dead, talking and actually began eating food he had with him. This was an accidental drug overdose. Thanks to Cameron’s quick thinking, he was saved.”

Jackson’s quick thinking and action served as a life-saving measure.

“When I was told that I had won the award, I was in shock,” Jackson said. “I just did this to try and save someone’s life. I’m not one who enjoys being in the spotlight. To most, the patient is an addict but to his family, he is a son whose mother wants him alive and well. He is a father whose son doesn’t deserve to hear that his father has died.”

Being named the Employee of the Year for 2020 will certainly be something that Jackson doesn’t forget anytime soon. While providing care during a pandemic, the CareSouth Carolina staff has experienced unprecedented challenges and obstacles.

“Our entire team works together and it has been hard at times,” Jackson said. “My son has asthma, so I have been taking extra precautions to make sure he was okay. I keep hand sanitizer with me and we’ve done an excellent job of keeping our facilities sanitized and conducting visits in a safe manner.”

More so than anything else, Jackson said she just wants to help people to the best of her ability.

“I like working in the medical field because I’ve always wanted to help people,” Jackson said. “When you come to the doctor’s office, you don’t want to feel like a burden or have a nurse that’s griping or complaining. I just love getting to put a smile on someone’s face.”

Jackson is currently pursuing a degree in Licensed Practical Nursing and said working with Dr. Stephen Smith for the past several years has been an asset to her growing in the field.

“I’ve worked with Dr. Smith for so long now, I almost know what medicine he is going to prescribe before he prescribes it,” Jackson said. “When I first came, I knew a little bit about the medical field and how to deal with patients, but working with him has helped me learn more about the clinical aspects, medical terminology and diagnoses.”

Outside of work, Jackson said she most enjoys spending time with her five-year old son.